Keep Calm and Let THEM Decide

Posted by PolicyPoint on Sep 25, 2014 in Personal Insurance Articles, Policy Points Blog | Comments Off on Keep Calm and Let THEM Decide 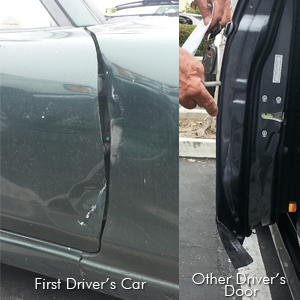 The driver was pulling into a parking lot and started to enter a space between two cars. Doing about 3 mph, he was about two thirds of the way into the space when the driver in the car to his right flung his car door open. The other driver’s car door hit the first driver’s vehicle just before the hinge of his passenger side door.  As he was still moving when this happened, he felt the impact as the other car’s door stopped his forward momentum and he was jolted forward.

Both drivers exited their vehicles. The other driver immediately began using foul language and accusing the first driver of hitting his vehicle. The driver asked how that is possible when the dent in his car is on the side. Cars can’t drive sideways. The finger pointing and foul language from the other driver went on for a few more minutes as tensions were high. Once the other driver finally calmed down, they exchanged insurance information and went their separate ways.

The moral of the story is: When in an accident of ANY kind and adrenaline is pumping, do NOT argue about who’s at fault. Just keep calm… the insurance companies will decide. (Always be sure no one is hurt… property can be replaced.)

DO exchange insurance information. (If the other person is uninsured, your uninsured motorist coverage will kick in… you have that, right? It is not a requirement.)

DO take photos with your phone. (Even though the insurance company’s adjuster will take their own photos, having photos taken immediately after the incident does help. Even take photos of the other person’s insurance card and license plate… after an accident, when your hands are shaking, it’s tough to write down information and have it be legible.)

DO file a claim immediately. (Don’t wait to get the process started. Reimbursement checks for cars with no lien holder can take weeks to receive.)

Stay safe out there… and remember if you are ever in an accident…”Keep Calm” (well, as calm as you can).