Posted by PolicyPoint on Sep 11, 2014 in Policy Points Blog | Comments Off on Anniversary of 9/11 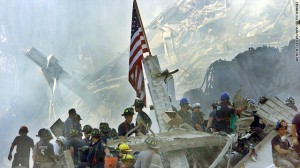 On this anniversary of 9/11, I just want to ask you… do you remember where you were 13 years ago when the 1st plane hit?

I do. I remember seeing the replay of the 1st plane hitting the twin towers, and watched live when the 2nd plane hit the 2nd tower. Shortly thereafter the report came that the Pentagon had been hit and a huge hole had been left in one of the sides.

I was with a group of people who watched horrified with tears in their eyes as people jumped to their deaths rather than burn in the buildings! I watched as fire fighters and rescue workers rushed into the danger zone without any thought to their own safety… and many never went home that day. I watched as reports came in of people on United Airlines Flt 93 over Pennsylvania calling husbands & wives to tell them they loved them and that their plane had been hi-jacked and Todd Beamer uttered those famous words “Let’s Roll”! Those great Americans who sacrificed their lives to STOP that plane from its mission, and left a huge whole in a field in little known Stonycreek Township near Shanksville Pennsylvania.

I don’t mean to be a downer by reminding you of what happened that day even though it was tragic, but in that tragedy we find what is best about AMERICA! What makes America great is the American people, their willingness in the midst of great tragedy to put the their own safety at risk to help others. The American people are what makes America great: the heroism, their selflessness, their willingness to help their neighbor; Our brave men and women who join our Armed forces around the world who protect us and are willing to give ALL for us. I know that there are corrupt politicians in both parties and in our government, but in this country we still have individual rights. You can open a business here. Women have more rights in this country than any other (in other countries they cannot even drive a car). I have heard that America is filled with problems and that may be true, but many immigrants still flock here to have a chance at true freedom and a better way of life than they would have had if they would have stayed where they were.

I am proud to have been born an AMERICAN, and thankful for all the privileges that being a citizen here affords. And on this anniversary of 9/11, I wish to remember ALL those whose lives were stolen from them on that day and the families whose loved ones were taken from them on that day with prayers and well wishes to all those affected by those who wish us harm. May God Bless us all and bring peace upon the whole earth. And May God Bless America!